AMRITSAR: India released 21 Pakistani prisoners who were languishing in jails across the country due to delays in the identification processes.The newly-released Pakistani prisoners, who were leaving for their home country, claimed that they did not deserve to be jailed and said that they felt good that they were going back home .A Pakistani fisherman, Ghulam Rasool, who was released from prison, said he was happy to be reunited with his family but was saddened for being held for a petty reason.
“I was held for something which is not right. 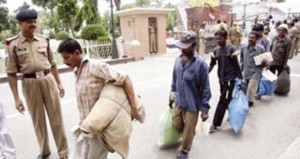 Fishing is not a crime. Who knows that they are the waters of Pakistan or Hindustan (India)?” said Rasool, who spent a few months in a jail in Gujarat.“I want to appeal to both the governments that our people are rotting in the jails and they should be released soon,” said Rasool.
Earlier in February, the Border Security Force (BSF) handed over 20 Pakistani prisoners to the Pakistani Rangers at Wagah outpost in Punjab.Media reports said the prisoners were lodged in various Indian jails and were released after the completion of the sentences as per the Indian law.Most of them were arrested in India on charges of inadvertent crossing. Out of 20 Pakistani prisoners, some of them were fishermen who had been jailed in Gujarat.Delays in identification processes hinder release of prisoners on time, who have been languishing in various jails of both neighbouring countries.