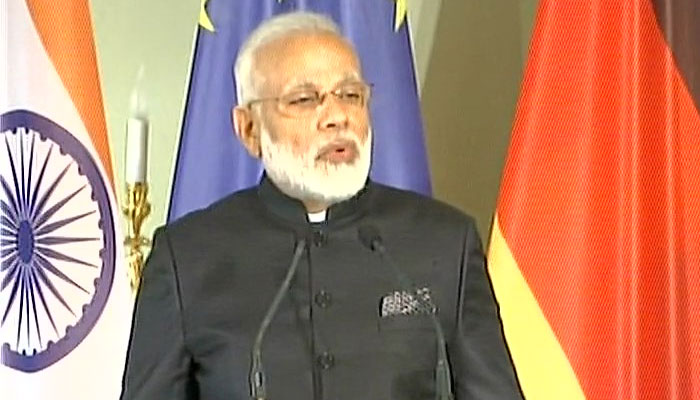 NEW DELHI : Speaking at the Indo-German Business Summit in Berlin on Tuesday, Prime Minister Narendra Modi said that India has one of the most liberal FDI policy regimes in the world. Modi added that more than 90 percent of foreign investment flows are under automatic route.

The Indian prime minister welcomed the German companies to India saying that the economic partnership of two countries is still below its full potential and therefore to enhance this,India is ready with open arms.“Make In India already created strong impact, Germany contributing in a big way in success of Make In India,” Modi said.
Talking about the goods and services tax (GST), Modi said that it is among the most historic reforms India has ever done and will be implemented from next month. He invited many more German companies to India saying, “our direction,desire and dreams create tremendous business opportunities.”Prime Minister Narendra Modi and German Chancellor Angela Merkel earlier today held the fourth round of the inter-governmental dialogue to set a roadmap for the bilateral strategic ties.

Modi was accorded a ceremonial welcome with military honours at the Chancellery, the office of the German Chancellor, where he was greeted by Merkel and senior German officials.He then introduced the Chancellor to his accompanying Indian ministerial delegation.Modi received a guard of honour and was welcomed as the the music choir of the German Army played the Indian National Anthem.

The two leaders then headed inside for the fourth India- Germany Intergovernmental Consultations (IGC) Plenary session, the focal point of Modi’s two-day visit to Germany. Modi was holding formal talks with Merkel as part of the IGC — held every two years –?where he was joined by his delegation of senior ministers, including?Minister for Science and Technology Harsh Vardhan, Commerce Minister Nirmala Sitharaman, Energy Minister Piyush Goyal and Minister of State for External Affairs M J Akbar.

The last IGC was held in New Delhi in October, 2015, when bilateral ties were significantly scaled up.At the IGC in Berlin, the two leaders were expected to clinch a host of agreements and sign MoUs to enhance the strategic partnership between the two countries. Reflecting on the fraught new era of U.S. relations with Germany, and Europe at large, German Chancellor Angela Merkel spoke on Sunday at a beer hall, and contended that her continent-mates “really must take our fate into our own hands.”

Those jitters about already weakening trans-Atlantic alliances were surely heightened as President Trump took to Twitter on Tuesday morning and accused Germany of maintaining a trade imbalance and under-contributing to NATO. Trump has also suggested that he might withdraw the United States from the Paris Agreement on combating climate change, which Merkel has championed.

Merkel on Tuesday reiterated her sense that Europe must seek new alliances, telling reporters in Berlin, “The times in which we can fully count on others are somewhat over, as I have experienced in the past few days.””Others,” in this case, seems to be a euphemism; Merkel was clearly talking about the United States.
On Tuesday, Merkel met with Indian Prime Minster Narendra Modi, and on Wednesday she will meet with Chinese Prime Minister Li Keqiang. Although Merkel has sought to dampen the notion that she wants to pivot Germany and Europe away from the United States and toward Eastern powers, Tuesday’s meeting with Modi could not have been more positive and cordial.”We are meant for each other,” Modi told Merkel, smiling widely.
“India wants the world not just to be interconnected but also that it should be sensibly run,” Merkel said by way of endorsing a trade agreement in the works between India and the European Union.”Whether it be bilateral relations, humanitarian issues, regional or global issues, every discussion with the chancellor has been very beneficial for me,” Modi said. “The pace of development of our relations is fast, the direction is positive, and the destination is clear. Germany will always find India as a powerful, prepared and capable partner.”
India and Germany are two of the largest economies in the process of trying to implement the Paris Agreement, and Merkel made special note of Modi’s demonstrated commitment to solar power. While India is massively expanding its coal production, Modi has pledged to simultaneously grow solar such that it will make up more than half of the world’s production by 2022.
The two leaders signed eight agreements pertaining mostly to cooperation on job skills development and environmental issues.
(Except for the headline, this story has not been edited by staff and is published from a syndicated feed.)