KOLKATA: `I am no Mayavati, no Mulyam Singh,’ that’s how Trinamool Congress leader and Bengal Chief Minister Mamata Banerjee reacted to mounting political pressure on the issue of Saradha Chit Fund scam and allegedly her party ministers’ involvement in the scam during an election time!
Mamata Banerjee was reacting to Congress and CPI(M)-led Left onslaught on her party over recent Enforcement Directorate (ED)’s revelations which stirred up anti-TMC political heat in the state. 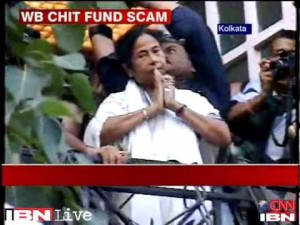 Even today Congress national spokesperson Abhishek Manu Singhvi and CPI(M) leader Biman Basu attacked Mamata Banerjee for trying to resist CBI enquiry into the scam.Saying she’s `no Mayavati or Mulyam Singh’ at a rally,  Mamata dropped hints that it’s actually the Union Finance Ministry which deputed the ED to stir up the heat and dust to sabotage her in election!
Incidentally, while TMC leaders believe it was Congress design from Delhi, the party still somewhat confident about the electoral outcome, despite a sad suicide of a frustrated investor yesterday, feel: “We know from experience, people will see through the deep conspiracy.’’But people who are committing suicide and millions who lost everything to Saradha, these stirring ups only rub salt on their old wounds, like, Congress’ reform-driven policies which left millions jobless and mal-nourished people because of great inflation story scripted by UPA II!