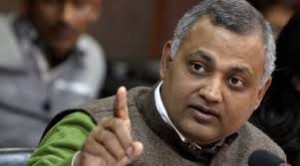 NEW DELHI : Apparently agitated but maintaining a painted smile throughout, Delhi’s Law Minister Somnath Bharti on Saturday lashed out at media and the Delhi Commission for Women, accusing them of politicising the issue of midnight raid.
Accusing the Delhi Commission for Women of defaming him, Bharti alleged that the DCW was a political organisation and its chairperson Barkha Singh hailed from Congress. On being asked whether he would resign on moral grounds over the midnight raid issue, Bharti lobbed an angry question at the media asking, “How much money has Modiji paid you?”.
Claiming that all the allegations against him were wrong, Bharti further alleged that the entire saga was being orchestrated by the BJP. Reacting to Bharti’s comments, the BJP slammed the Aam Aadmi Party for the language used by its ministers, calling them “unguided missiles”.
Speaking to the reporters, the BJP leader Mukhtar Abbas Naqvi said that the ministers of AAP must inculcate some discipline and manners and must think twice before speaking, reported the media. ”Till now the media was giving them so much positive publicity, and appreciating their actions, so was all that paid?” he added.
Delhi’s Law Minister Bharti is under fire from all quarters for allegedly having led the mob which misbehaved with African women during the midnight raid at Khidki Extension.
Earlier, even the National Commission for Women demanded his resignation, with its chief Mamata Sharma saying that CM Arvind Kejriwal should ask Somnath Bharti to quit over the alleged misbehaviour with Ugandan women.
Meanwhile, the Delhi Commission for Women Chairperson Barkha Singh will today meet Lieutenant Governor Najeeb Jung seeking a First Information Report (FIR) against the minister. Barkha Singh’s expected visit to the Lieutenant Governor’s office today follows a chaotic day of confrontation between her and the lawyers of Somnath Bharti who had reached the office of the DCW chief with the law minister’s response.
The DCW chief earlier said that Bharti had ignored the two summons sent to him by the commission. She further warned that Bharti would have to face an FIR if he failed to respond to the third summon and didn’t appear before the commission on Friday.
On Friday, Bharti’s lawyers reached the DCW office, but the chairperson refused to accept their response by insisting that the minister should have appeared in person himself. Meanwhile, Bharti was reportedly busy flying kites at an event near ISBT. Bharti, an IITian and a law graduate, has also been lambasted for his crude remarks against lawyer Harish Salve and BJP leader Arun Jaitley.