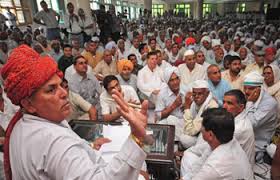 GURGAON: For a state known to ban marriages within the same ‘gotra’ (clan), a community in Haryana’s Gurgaon district has been forced to abandon a 600-year-old tradition of brotherhood within the community and allow such marriages.
The tradition has taken a break mainly because of rampant female foeticides leading to a skewed sex ratio of 879 girls for every 1,000 males, making Haryana the worst among Indian states in this aspect. The country’s sex ratio improved to 943 in the 2011 Census against 933 females per 1,000 males in the 2001 census.
The Jat Khap Panchayat (community council) of Jaurasi-Fatehpur village near Taoru, some 32 km from here, recently decided to put an end to the ban on marrying children within same village and brought the proposal to Gurgaon Gaon village recently. Jaurasi-Fatehpur holds ‘Chaudhar’ (leadership) of 12 villages while Gurgaon Gaon enjoys this status in 18 villages.
“Jaurasi village, later extended and established as Fatehpur village, had brotherhood relations with Gurgaon Gaon, Basai, Dhanwapur, Garauli Kalan, Garauli Khurd and Kadipur for over 600 years,” Atalvir Kataria,
Aaccording to a panchayat leader,
Marriages were not allowed among these villages.”The panchayat of 25 villages was held recently and it decided to lift the ban. Now Jaurasi-Fatehpur and other six villages can marry their youth in each other’s communities,” Kataria said.
“The low ratio of females in the region was one of the main reasons behind lifting the ban,” told social worker Raj Nirbhik .
The majority of Jat families in the region preferred to marry their youth in and around Gurgaon district and avoided Rohtak, Jind, Sirsa and other districts.
“People have relationships in Haryana, Rajasthan and Uttar Pradesh too, but Gurgaon, Jhajjar and Delhi are given preference,” Nirbhik said.Marriages between five Gotras including own, mother’s, grandmother’s (Dadi and Nani) were not allowed earlier, but now the situation has changed. Some marriages are now being allowed by the communities.
“This step will make things better. The earlier rules of the communities were too strict regarding marriages. Young men and women were finding it difficult to get the right life partner. Now, the options will increase,” Abhay Kumar, a youth from one of the villages in Gurgaon district, told..
The sex ratio in Gurgaon district is the worst in Haryana – only 854 females against 1,000 males.The state government recently honoured Wazirpur and Bhora Kalan villages in Gurgaon for better sex ratios of 1,046 and 947. The village panchayats were rewarded Rs.100,000 and Rs.50,000 respectively. Both villages are dominated by the Rajput community.