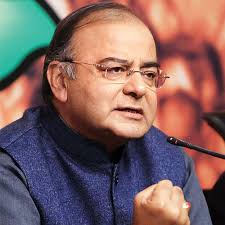 NEW DELHI: Finance Minister Arun Jaitley said, the government has proactively taken measures to remove problems in stressed sectors and expressed the hope that the bad loans situation in the banking sector will improve for the better .
Speaking to media after Quarterly Review Meeting of public sector banks in New Delhi , Mr Jaitley said, there is an unacceptable level of bad loans at Indian banks and part of stress on banks is due to certain sectors.
He asked the bankers to get rid of the past scars of Non Preforming assets ,NPAs and clean up their balance sheet at the earliest. Mr Jaitley assured them full support of the Government in this regard.

The minster said, series of steps that have been announced by RBI in this direction will certainly improve on the quality of those assets. The gross NPAs of PSBs rose to 6.03 per cent at the end of June 2015, as against 5.20 per cent in March 2015.

On the issue of wilfull defaulters, Mr Jaitley said, the banks have full authority to deal with each of its dectors in prudent manner. He added when the bankruptcy law gets passed the ability of banks to get failed creditor to exit will increase.
Mr Jaitley informed there were several suggestions made by bankers on steel and aluminium sector stress in the meeing and the department of financial services, department of revenue and the commerce ministry will look into these suggestions.
Jaitley said that the government has received an overwhelming response to it social security schemes and there were discussions with bankers to further provide an impetus to these schemes.