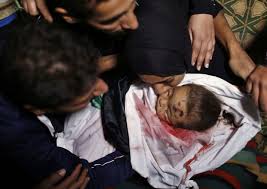 NEW DELHI : In an interview to the CBS news, Netanyahu said that Israel’s security was of utmost concern to him and it didn’t matter if the global opinion turned against Israel with each civilian death in Gaza.Speaking to the CBS’ “Face the Nation” on Sunday, Netanyahu reiterated that Hamas was responsible for civilians’ death as it was using them as “human shields”, as Hamas wanted to gain global attention by letting more and more civilians die.
Fighting has reportedly subsided in Gaza after Hamas accepted a 24-hour ceasefire, despite Israeli PM Benjamin Netanyahu’s comments made in TV interviews that it wasn’t oblige to accept a truce as and when the terrorists agreed.Even after Hamas accepted the truce, Israeli military says, the militants continue to fire.”5 outgoing rockets from a populated area in Gaza a short time ago.” posted the Israeli Defense Forces.
Also Read: Gaza violence: Doesn’t matter if global opinion turns against us, says Israel PMMeanwhile, the Palestinian death toll has shot upto 10,50 according to Gazan health ministry.Giving a legal face to its assaults on Gaza, Israeli Army on Sunday said that the civilian houses, if used for attacking, can be seen as “legitimate military targets under international law”.Israel maintains that Hamas uses civilians as human shields and hides weapons in places as innocuous as schools, hospitals, etc.