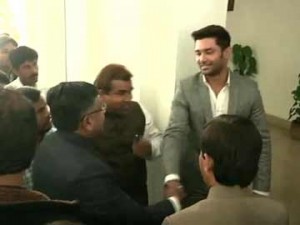 NEW DELHI : Bihar politician Ram Vilas Paswan today met senior BJP leaders ahead of a widely expected announcement that he will revive an alliance with the party he had distanced himself from 12 years ago, over the 2002 riots in Narendra Modi’s Gujarat.
His son, Chirag Paswan, confirmed that by saying, “Officials talks with BJP for alliance have started”, after a follow-up meeting with other BJP leaders where he reportedly gave last-minute touches to the deal on seat-sharing in Bihar in the general elections due by May.The BJP leaders who met Mr Paswan today – Ravi Shankar Prasad, Rajiv Pratap Rudy and Shahnawaz Hussain – are all from Bihar and have worked with him in Atal Bihari Vajpayee’s cabinet.
“We had good talks with him. We also had sweets and tea. We will speak in more detail later,” Mr Prasad had said.Chirag Paswan said, “They are good friends of my father. They worked together as ministers.”Mr Paswan had on Wednesday hinted at walking away from long-time partner Lalu Prasad, saying he was keeping all options open, including a tie-up with the BJP.
For the BJP, the return of Mr Paswan will be an important part of its campaign to demonstrate that Narendra Modi, its prime ministerial candidate, enjoys more acceptability and can draw allies.Mr Paswan had quit the BJP-led government at the Centre in April 2002, criticizing Mr Modi for his handling of the communal violence that tore through Gujarat in the aftermath of the killing of Hindu train riders in Godhra earlier that year.
Last year, the BJP had lost one of its oldest allies, the Janata Dal (United), when it became clear that it would project Mr Modi as its face in the 2014 general elections. The two parties were partners in the Nitish Kumar government.

Just last month, Mr Paswan had announced that his party, along with the RJD and the Congress, will contest the next Lok Sabha elections jointly in Bihar. But he was reportedly not satisfied with the seat-sharing talks were shaping.