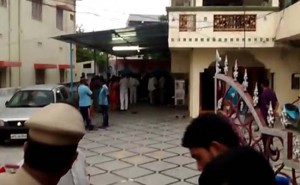 WARANGAL ( Telangana) :  The burnt bodies of the daughter-in-law and three grandsons of a former Congress parliamentarian, Siricilla Rajaiah, were found this morning after a fire at his home in Telangana’s Warangal.
Sarika and her three sons, Abhinav, 7, and two-year-old twins Ayan and Sriyan, were on the first floor of the bungalow when the fire broke out, allegedly because of a gas leak.
Mr Rajaiah, 62, was supposed to file his nomination papers today for the Warangal parliamentary by-election on November 21. He is shell-shocked, say Congress leaders.
The politician was seen sitting on the ground outside his house, weeping and saying repeatedly: “Sonia ma (Congress president Sonia Gandhi), please forgive me.”
With Mr Rajaiah opting out, the Congress is looking for another candidate on the last day of nomination.The police are investigating how the fire started.
Ex-Congress lawmaker Siricilla Rajaiah’s daughter-in-law Sarika’s burnt body was found this morning after a fire inside the house.Last year, Sarika, a former IBM employee, had filed a case of harassment and even protested outside her father-in-law’s house with her children.
Sarika married Mr Rajaiah’s son, Anil in 2002. The marriage was reportedly strained over Sarika’s allegations that her husband was having an affair.Anil was reportedly on the ground floor and Mr Rajaiah on the second floor at the time of the fire.