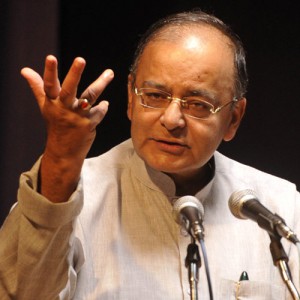 NEW DELHI: Finance minister Arun Jaitley said on Wednesday that bringing back black money is more important than making it an issue between the NDA vs UPA. Responding to the debate on the issue of black money in the Rajya Sabha, the finance minister said that the government is raising its capacity to deal with black money issue.
“It is good to see that everyone wants to see work done on the issue of black money,” the FM said. The government is following the Supreme Court directions on black money issue, the FM said. “In June, we handed over whatever details we had in the black money case to the two judges heading the SIT,” Arun Jaitley said.
“In this age, no one physically carries black money abroad,” the FM added.”The issue is not whether to disclose the names of black money account holders or not, but when and how to disclose them,” Jaitley said.
“The government has identified holders of 427 accounts abroad, notices have been sent to them,” the FM said. “250 people have admitted having accounts abroad,” the FM added. Earlier, the issue of repatriating black money placed in banks abroad was again in focus in Parliament for the second consecutive day on Wednesday.
The opposition repeatedly disrupted proceedings both in the Lok Sabha and the Rajya Sabha over the issue of black money.
The Rajya Sabha had to be adjourned because of a ruckus created over this issue as also on a Congress demand for the renaming of Hyderabad Airport.In the Lok Sabha, Speaker Sumitra Mahajan had to warn Trinamool Congress members against repeating Tuesday’s umbrella protest in the House.