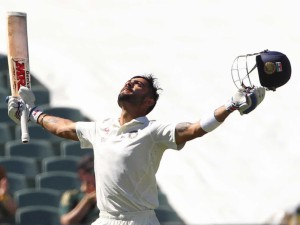 NEW DELHI : Virat Kohli made an eventful Test captaincy debut in Adelaide, playing an aggressive and positive brand of cricket against Australia. However, in pursuit of a memorable win, India ended up losing the Test by 48 runs, raising questions over some of Kohli’s ‘aggressive’ tactics.
Former India skipper and NDTV’s cricket expert Sunil Gavaskar, however, believes it was an impressive debut for Kohli, who is earmarked as a future leader of the side and the heir apparent to Mahendra Singh Dhoni. “We should be very happy that Virat Kohli has impressed as captain. In history of cricket, there’s been no perfect captain. To expect it from Kohli is expecting too much,” Gavaskar told Reporters.
On a riveting fifth day’s play, Kohli’s men attempted to achieve the highest-ever run chase – of 363 runs- at Adelaide but fell short by 48 runs. After reaching a good position at tea, the visitors continued to throw caution to the wind, but lost eight wickets in the final session to end up on the losing side.
“Nothing wrong with Kohli’s aggressive approach, but I believe after Rohit Sharma got out on the final day, there should have been a good mix of caution and aggression, which would have helped us to look for a win and at the same time if the win was not possible, we could have got a draw. When you find that you cannot win, you save the game.,” Gavaskar said.
With Dhoni having poor numbers in overseas Tests and Kohli making a massive impact on his captaincy debut, there has been a raging debate as to whether it’s time to let Kohli take over the reigns on a permanent basis.Gavaskar, however, disagreed and felt there was no question about who leads India in the remaining Tests in Australia.
“I think there is no question at all. Dhoni is captain for tour to Australia. No question on captaincy for Brisbane Test. I think we are just creating a question. There is no debate, Dhoni is captain for the next three Tests.””Dhoni is the appointed captain for the series. Selectors can’t say ‘hello Mr Dhoni, but we want Virat to continue'”, Gavaskar added.
Gavaskar also felt that comparing win percentages of Dhoni and Kohli as Test captains was an unfair argument. Dhoni has a win percentage of 16.67 in 24 overseas Tests as captain while Kohli has only led the team in one Test match.”As far as I am concerned, Kohli’s win percentage is 0, so how can you compare?” he said.All eyes will now be on Dhoni, who is expected to return and lead India in the second Test against Australia in Brisbane, starting December 17.