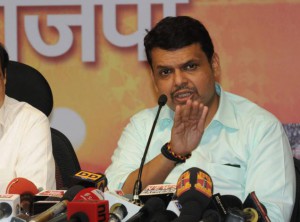 MUMBAI: Names of the BJP’s possible chief ministerial picks for Maharashtra and Haryana sparked a buzz just before voting in the two states on Wednesday.Sources say Devendra Fadnavis and Eknath Khadse are among the frontrunners for Maharashtra. In Haryana, the party’s choices include Captain Abhimanyu, Rao Inderjit Singh and Ram Vilas Sharma.
As reports suggested he was leading the race, Mr Fadnavis tweeted, “BJP’s legislature party & parliamentary board will decide who will bcom CM of Maharashtra post results. Everything else is just speculation (sic).”Mr Fadnavis heads the BJP in Maharashtra and is reportedly seen as a “new-age leader” in BJP’s largely jaded line-up in Maharashtra. The 44-year-old Brahmin leader is known for his clean image and wide acceptability.
Mr Fadnavis is from Nagpur, the base of BJP’s ideological mentor Rashtriya Swayamsevak Sangh. Eknath Khadse, the other chief ministerial aspirant, was leader of opposition in the Maharashtra assembly.The BJP is contesting the Maharashtra polls alone after ending its 25-year alliance with the Shiv Sena. Sources say the party did not want to project a chief ministerial face before this fearing it would dilute a campaign crafted around PM Narendra Modi and his development pitch.
The BJP is seen to lack a prominent face in Maharashtra since the death of Gopinath Munde in a car crash in June. Union minister Nitin Gadkari, who addressed some 100 rallies in the state, has denied speculation that he is in the running for chief minister.In Haryana, another young leader, Captain Abhimanyu, has emerged as a top contender for chief minister.
The former party spokesperson was reportedly handpicked by Amit Shah for his “mission Uttar Pradesh” during the April-May national election; Captain Abhimanyu focused on western parts of the state that gave the BJP its richest haul in the polls.”I will not shy away from any responsibility the party high command chooses for me,” Captain Abhimanyu told Reporters.