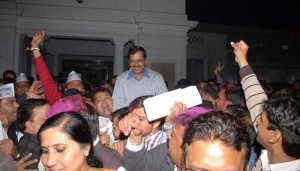 NEW DELHI: The Delhi assembly on Friday passed the Delhi Jan Lokpal Bill, 2015, which the AAP government has described as the “strongest” anti-graft legislation in the country.
The house cleared the bill with two amendments passed by the Delhi cabinet on Thursday evening after some changes were suggested by activist Anna Hazare.
“A strong law is being brought. We will go to the Centre and the prime minster and urge him that the Jan Lokpal be passed,” Delhi Chief Minster Arvind Kejriwal said in the assembly.
Opposition leader Vijender Gupta called the bill as “political document which was in the violation of the constitution”.

The first amendment said a seven-member panel would select two members and chairperson in the institution of Jan Lokpal.The original bill said the panel consisting chief minister, leader of opposition, assembly speaker and Delhi High Court chief justice will select the members and chair of Jan Lokpal.
Now, the proposed new members will include another judge from the high court, any eminent personality selected the rest of the committee members and the Lokpal chairman from the next term.

The second amendment said the Jan Lokpal would be impeached only after a high court monitored probe against the ombudsman.The legislation will not become law till the central government approves it.