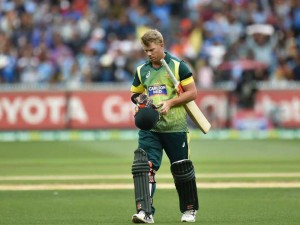 Warner said the verbal exchange at a one-day international at the Melbourne Cricket Ground on Sunday earned him a fine of 50 percent of his match fee from the International Cricket Council.
The Australian fielders had taken offence when the Indians went for a single off an overthrow which they wrongly believed was in breach of cricket etiquette.
“When I went over to say something to him, he sort of said something in their language and I said ‘speak English’ because, if you’re going to say something for me to understand, theoretically I cannot speak Hindi,” Warner told Sky Sports Radio.
“So I did the polite thing and asked him to speak English, therefore he did and I can’t repeat what he said.”Asked whether there was anything wrong in the manner in which he asked the question, Warner said: “I thought I was OK by asking him to speak English and I am going to say it a couple of times if he keeps saying it in Hindi.”
Warner admitted he should not have confronted Sharma but said the pair had been engaging in “friendly banter” during the match, which Australia won with six balls to spare despite a century by Sharma, and he didn’t feel the need to apologise.
“No, because we were actually going at each other anyway during the game,” he said.During the summer’s Test series against India, which saw repeated heated sledging, Warner said he would not be toning down his “banter” and he repeated that stance Monday.
“If people get on the wrong side of me, I’m not going to back down,” he said.
“We’re always there to play hard aggressive cricket, but you know what comes with that — that’s what happens, sometimes you are going to get fined.”We’ve got to keep trying not to cross that line, and we’ve got to work hard at that, and that’s what we’re all about — playing cricket the right way.”
Australia have won their first two games in the triangular one-day series against England and India and face England again in Hobart on Friday.