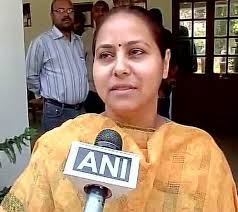 PATNA: Daughter’s love forced RJD chief Lalu Prasad to bargain with jailed gangster Ritlal Yadav to get his support for Misa Bharti and appoint him the party general secretary.Yadav was appointed Monday. Bharti is contesting from Patliputra in Bihar. ”Lalu has announced Yadav’s name as the general secretary of the RJD (Rashtriya Janata Dal), a gift to him for supporting Misa Bharti,” a senior party leader said.
Lalu was worried since last week after Yadav, a terror in the rural areas, revealed his plan to file nomination papers March 25 as an independent from Patliputra. Yadav is currently lodged in Patna’s Beur jail in connection with the murder of BJP leader Satya Narayan Sinha and husband of party legislator Asha Sinha. He was granted permission by a civil court to contest the general election.
Yadav was adamant on throwing his hat in the poll ring despite several RJD leaders, on behalf of Lalu, urging him not to do so as it would divide the Yadavs, considered the main social support base of the party. Three Yadavs – ruling Janata Dal-United candidate and sitting MP Ranjan Prasad Yadav, BJP’s Ram Kripal Yadav and Misa Bharti of the RJD – are already in the fray that would lead to division of votes.
Last Saturday, Lalu visited Yadav’s home in Kthwan village and met the latter’s father Ramasish Rai, also the village head.
“Lalu, in a closed door meeting for over an hour, urged Yadav’s father to convince his son not to contest and instead, support Bharti,” the party leader said. Lalu later again paid a visit. ”Ritlal agreed not to contest after Lalu assured tickets to him and his wife for the 2015 assembly poll,” the leader said. Yadav may be a notorious criminal but villagers, particularly those of his caste, consider him “Robinhood”. In the 2010 assembly election when RJD denied him a ticket, he got over 50,000 votes that threw a spanner in the chances of the party candidate.