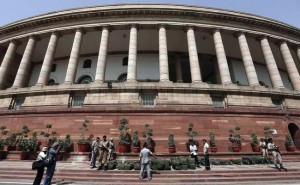 NEW DELHI: Hoping to end the deadlock in Parliament, the Bharatiya Janata Party (BJP) has called an all-party meeting on Monday after the Congress chose to skip the meet called last week. PM Narendra Modi is also likely to make a statement in Parliament today over a host of issues, including the ‘Laltgate’ controversy and the Vyapam recruitment scam.

The government is expected to reach out to the Opposition for support on the pending legislative agenda during the all-party meet. The government called for an all-party meet after Parliamentary Affairs Minister M. Venkaiah Naidu blamed the Congress for stalling India’s growth story by pinning the Parliament impasse on the principal opposition party.
The Congress has insisted that the issue of action against three top BJP leaders should be on the agenda if the deadlock in Parliament is to be broken.
I appeal to all political parties to allow Parliament to function says Naidu.To make matters worse, Agriculture Minister rubs salt into their wounds by giving an outrageous answer to a question on farmer suicides: Sonia GandhiGovt’s anti-farmer policies have crippled rural India.
Sonia GandhiParliamentary majority does not give anyone a license to escape accountability: Sonia Gandhi at CPPThere is a mountain of incontrovertible evidence in public domain for PM to require resignations of EAM and the two CMs: Sonia Gandhi
Our stand is clear, the way corruption has happened we want resignations: Congress VP Rahul Gandhi at CPP meet.
We’re not being aggressive just to match BJP’s aggression of past, we are forced to take our position because of NDA govt’s brazen attitude: Sonia Gandhi
The PM has turned out to be a master re-packager, a skillful salesman, a sharp headline grabber and a clever news manager: Sonia GandhiHas BJP forgotten it’s author of “resign-now-debate-later” Parliamentary practice, which it has used on at least 5 different occasions since 1993: Sonia Gandhi
No productive discussions,no meaningful proceedings as long as those responsible for gross wrong-doings remain in office: Sonia GandhiYesterday’s agitators in both the Houses have suddenly become today’s champions of debate and discussion: Sonia Gandhi

The ‘Mann ki Baat’ man appears to retreat into a ‘Maun Vrat’ whenever there is a scandal involving his colleagues: Sonia GandhiOn the other, he has been conspicuous by his deafening silence on blatant transgressions by his EAM and two of his CMs: Sonia Gandhi
On one hand, he never misses an opportunity to claim moral high ground on transparency, integrity and accountability: Sonia GandhiThe PM has been very free with his promises yet he seems totally incapable of delivering on them: Sonia Gandhi at CPP meet

The current session of Parliament is a relatively short one but it is already proving eventful: Sonia GandhiWe will fight against the brazen attitude of the Govt: Sonia Gandhi at CPP meetingWon’t let Parliament function until the demands raised by Opposition.
Congress vice president Rahul Gandhi present at the meet.

Congress must understand they are not only stalling Parliament proceedings but are creating hindrance in progress of nation: MA Naqvi, MoS, Parliamentary Affairs.It depends on them, If they (BJP) want the House to function, demands raised by Opposition should be met: Mallikarjun Kharge, Congress.After PM Modi’s meeting with NDA ministers, proposal to carry on discussions in Parliament will be brought forward at all-party meet..
Resignations on Lalitgate and Vyapam scams have been ruled out, NDA govt open to discussion and PM Modi’s intervention in Parliament likely, reports News Agency.
PM Narendra Modi to meet senior Cabinet Ministers at 10:30 am in Parliament today.PM Narendra Modi is also expected to make a statement in Parliament today.All-party meet is expected to begin around 12 noon.
Centre has called an all-party meet today hoping to end the logjam in Parliament.Sonia Gandhi is expected to address Congress parliamentary party today.
Minister of State for Parliamentary Affairs Rajiv Pratap Rudy on Sunday expressed hope that the Parliament will function tomorrow after a continued spell of adjournments and disruptions.Congress leader Salman Khurshid had said the opposition parties have made some legitimate demands which have to be met.