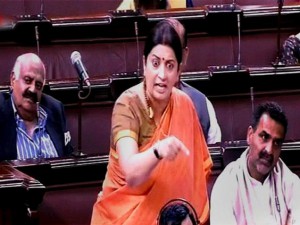 NEW DELHI: After Human Resource and Development Minister (HRD) Smriti Irani’s spirited defence against the two controversies that broke out in Hyderabad Central University (HCU) and Jawaharlal Nehru University (JNU), the Congress on Friday decided to remain firm on debating nationalism in Parliament.
Sources said that party president Sonia Gandhi made it clear that “the leadership agrees on principle that they must fight the BJP and the RSS over the question of nationalism.” On Wednesday evening, the party staged a walkout in the Lok Sabha before Ms. Irani began her speech, which was later applauded by Prime Minister Narendra Modi.
On Thursday, Deputy Leader of Opposition in Rajya Sabha, Anand Sharma, objected to Ms. Irani’s repeated attempt to debate Mahishasura, whom she referred to as a demon decapitated by Goddess Durga, saying that the Minister cannot bring up “blasphemous” narratives that are baseless and are confined to campuses.
Mr. Sharma said the party is interested in debating nationalism as long as the ruling party doesn’t commit “blasphemy” or “misrepresent facts.”“Why shouldn’t we discuss nationalism? And why shouldn’t we stop them from doing blasphemous talk?” said Mr.Sharma.
“India is a 83 % Hindu majority country. We don’t want religious sentiments to be hurt. Even if something was said about Prophet [Mohammad], Congress would not have kept quiet.”

Mr. Sharma said that the party is pleased to see that there is a “counter narrative” building against the ruling BJP. “You think followers of Nathuram Godse and Veer Savarkar don’t have a counter narrative in republic of India? Still 69 % of Indians voted against the BJP. Let’s not forget that.”