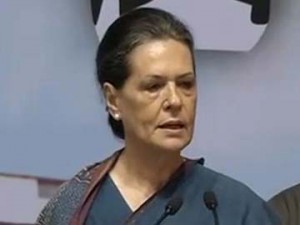 NEW DELHI :Sonia Gandhi today accused the Narendra Modi government of showing “false dreams” to the people of India and urged her Congress party to stay the course even though the road to revival may be “longer” and the struggle, harder.”We have done so much but our track record was forgotten as people got caught up in a web spun by those who showed nakli sapne (false dreams),” the Congress president said at an event in Delhi on the 70th birth anniversary of her husband, former Prime Minister Rajiv Gandhi, who was assassinated in 1991.
Mrs Gandhi repeated her charge that the new government was taking credit for the programmes started by the previous Congress-led regime.”Today, those who have come to power, as is their habit, are announcing programmes that were started by us. I want to know who started the Nirmal Bharat Abhiyan (Clean India Drive)? Tell me who started building toilets under MNREGA schemes? Who promoted self-help groups in rural women or the ASHA scheme under the National Rural Health Mission? Who did all this?” she questioned.
Her comments are being seen as a direct challenge to PM Modi, who had announced in his Independence Day speech last Friday that his government would focus on making every village a “model village” with toilets in every home. Mrs Gandhi also noted that the party had a “long struggle” ahead to recover lost ground. “We will leave no stone unturned to bring back Congress’ aan, baan, shaan (pride and glory). Our struggle may be a little longer and may require more hard work but I assure you that we will win back our support base,” she said.
The Congress president’s pep talk comes after the party’s epic defeat in the national election three months ago. The Congress was reduced to just 44 seats nationwide – its lowest ever tally since the 1947 Independence – while the BJP rode to power with a massive mandate.”Winning and losing is part of life…the real thing is to stick to our ideology. The Congress has never sacrificed its principles for elections,” Mrs Gandhi told party workers.
Meanwhile ,Rahul Gandhi, who led the Congress to its worst-ever electoral performance, addressed party workers in Delhi today to motivate them for elections that are coming up in states like Haryana and Maharashtra.”Every scheme of the UPA has helped empower the common man,” said Mr Gandhi, 44, referring to the government that was anchored by the Congress and voted out in May.
Mr Gandhi, referring occasionally to notes, focused a large part of his speech on urging his party to ensure the safety of women. “In India, we worship goddesses,” he said. “But the same people who go to temples to pray to goddesses molest you in buses. Every woman in India has been oppressed at some point,” Mr Gandhi said
The issue of sexual violence against women has been a topic of national outrage and debate since December 2012 when a young Delhi student was fatally gang-raped on a moving bus. The government led by Mr Gandhi’s party then introduced tough laws to punish sexual crimes, but heinous gang-rapes have been reported since then including in Mumbai, often considered the country’s safest city for women.