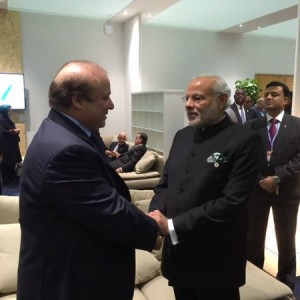 NEW DELHI: The Congress Party on Monday took strong exception to Prime Minister Narendra Modi meeting with his Pakistani counterpart Nawaz Sharif on the sidelines of the Paris climate conference, stating that there should be a political consensus in the country before these talks take place abroad.
“We were not aware of Modi ji meeting Nawaz Sharif; I believe there should be a political consensus in the country before these talks take place,” former law minister Ashwini Kumar told .
“Till the time acts of terrorism don’t stop from Pakistani side, these talks won’t be fruitful. This has been the stated position of the country and the Congress party,”he added When asked if this initiative was a good move for taking ahead the dialogue process with Pakistan, Kumar pointed out that when circumstances are in favour, then only these initiatives matter, otherwise they fail to have an impact.
Meanwhile, senior Congress leader Ambika Soni raised doubts on Pakistan Prime Minister Sharif’s credentials of having a mandate. “One doesn’t know if Prime Minister Nawaz Sharif has mandate to assure the Prime Minister that he genuinely wants to discuss the issues which are in the interest of the people of both the nations,” she said.
Prime Minister Modi’s meeting with Nawaz Sharif has drawn mixed responses from all the corners, with experts dubbing it as an opportunity for future talks and few terming it as an act of diplomatic courtesy.
Prime Minister Modi and Sharif were seen shaking hands on the sidelines of the summit where 150 heads of states and governments will make three-minute speeches each, offering their political support to the negotiations that are expected to deliver a landmark global agreement on climate change.