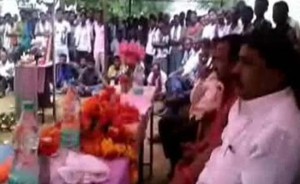 BASTAR: (Chhattisgarh) :  A religious conversion ceremony organised by the Vishwa Hindu Parishad in Chhattisgarh in October was attended by a BJP lawmaker from Bastar.
A mobile phone video of the conversion ceremony in Madhota village in Bastar, which has been accessed by NDTV, shows the MP, Dinesh Kashyap, welcoming the 33 families who reconverted to Hinduism from Christianity. Mr Kashyap was the chief guest at the ceremony.
“I did attend the reconversion ceremony which was organized by the Vishwa Hindu Parishad in October. But it was not like what happened in Agra. In the reconversion ceremony I attended, people voluntarily reconverted. They were lured by the people of Christian community and that day they returned to Hinduism,” said Mr Kashyap.
The lawmaker also expressed concern about the problem of forceful religious conversion.
“There is a problem of forceful religious conversions in my constituency of Bastar and in other states as well. In Bastar, innocent tribals are lured by people of other religion and are being converted. I am a tribal too and such activities are now becoming a threat to our existence. In Parliament on Thursday this issue has been raised and I am, hopeful that the Centre will come up with a stricter anti conversion law which will stop all this.”

A united opposition has been targeting the BJP-led government in Parliament over the religious conversion of some 200 people in Agra in Uttar Pradesh on Monday, allegedly by groups linked to the Rashtriya Swayamsevak Sangh or RSS, which is the ideological mentor of the BJP. On Thursday, the opposition forced a debate on the issue in Parliament.
They also asked the BJP to explain the statements of its MPs such as Yogi Adityanath who called conversions to Hinduism “gharwapsi” or homecoming, claiming that those converted had embraced Islam only some decades ago.
Adityanath has declared that he will go ahead with a similar event planned in Aligarh later this month to convert Christians and Muslims to Hinduism.
Parliamentary Affairs Minister M Venkaiah Naidu, while replying to the debate, accused the opposition of trying to defame the government and called for an anti-conversion law in all states as well as at the Centre.
“Our parliamentary affairs minister is mulling steps to be taken to check coerced conversion. He has appealed to all parties to come together and discuss on it. It depends on the other parties now,” BJP President Amit Shah said in Raipur yesterday.