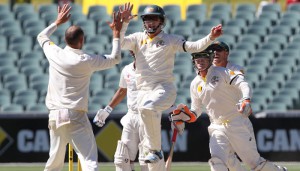 The number three batsman had a tough time against Lyon as he was caught back on his crease many times, with the bowler looking to use the rough areas consistently. Only with two successive boundaries off the backfoot in the 14th over, he had managed to release some pressure.
But his uncomfortable vigil at the crease didn’t last long as Lyon broke through in the 20th over finally, a delivery that held its line taking a healthy outside edge for keeper Brad Haddin to snap up his second catch in the innings.Pujara scored 21 runs off 38 balls, inclusive of 4 boundaries.
Skipper Kohli joined Vijay in the middle then and the two batted without much fuss for the remainder 14 overs in the session. The two batsmen brought up the 100-run mark in the 31st over.