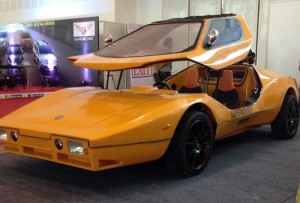 AHMEDABAD: India’s first indigenously developed electric sports car, the Supernova Electric Vehicle (SNEV), was recently showcased at the Gujarat Auto Show. Developed by a Gujarat based company – Golden Arrow Wireless Pvt Ltd. – at its facility in Aslali, Ahmedabad, the ‘green sports car’ might be launched by the end of 2015.
The electric sports car will be available in three battery options – lead acid, lithium ion and super-capacitors. The super capacitors charge in less than five minutes, whereas the lead acid and lithium ion batteries have charging time of 8 hours and 2 hours, respectively. The Supernova is claimed to go about 1000 kms in a single charge and has a top-speed of 150km/h.