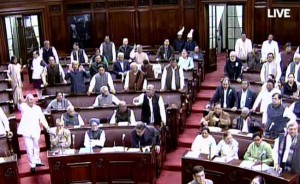 NEW DELHI : A massive row over religious conversions hit work in Parliament today as the opposition raised slogans demanding the government’s statement. The ruling BJP has said it is open to a discussion in the house but not political point-scoring.

Opposition parties shouted slogans in the Lok Sabha demanding the government’s explanation on the conversions in Agra on Monday, reportedly by groups linked to the ruling BJP’s ideological mentor RSS or Rashtriya Swayamsevak Sangh (RSS).”If the ruling BJP is not involved, then it should at least stop these conversions.

All opposition parties should come together against this. Conversions in Aligarh and other places will lead to communal problems all over the country,” said BSP Chief Mayawati.The government has said it is open to a detailed discussion in the house. “We want detailed discussion too, but not chaos and targeting of the government,” said Union Parliamentary Affairs Minister M Venkaiah Naidu.Mr Naidu also said his government was ready to consider an anti-conversion bill if the opposition was “sincere”
.The BJP has denied any role in the conversions, but some of its MPs have defended what they describe as “ghar vapsi” (homecoming).To demonstrate his view that the recent conversions involved families who had embraced Islam just a few decades ago, BJP MP Vinaya Katiyar said, “Even Omar and Farooq Abdullah may have been Hindus, if we see.
“BJP MP Adityanath has declared that he will go ahead with a similar event planned in Aligarh on December 25 to convert Christians and Muslims. “This is not conversion but ghar vapsi. My programme is in Aligarh. Those who want to join can come,” Adityanath said on Wednesday.
An FIR or police complaint has been filed against the Agra conversions based on a villager’s allegation that 57 Muslim families chosen from a rag-pickers’ colony were given inducements like I-cards for welfare schemes to convert to Hinduism.The ceremony was allegedly organized by activists of the Bajrang Dal and Dharam Jagran Samanvyay Vibhag and featured chanting by priests and a havan.

The government is keen to run the house smoothly, to be able to push legislation like the Insurance Bill, which seeks to raise the cap on foreign investment in insurance to 49 per cent from the current 26 per cent. The government wants to introduce the Bill for passing on Monday.