NEW DELHI : A day before voting in Delhi for the national election, Arvind Kejriwal, the top man of the Aam Aadmi Party or AAP, reached out to two men who have attacked him during his campaign.Mr Kejriwal first called on Lali, an auto-rickshaw driver who slapped him in Sultanpuri in northwest Delhi yesterday.Lali was a picture of contrition as he spoke to the AAP leader with folded hands, and tried to touch his feet. “I apologise. I committed a huge mistake by attacking him,” he said.Mr Kejriwal responded, “I forgave him.”
The AAP leader was in an open jeep when Lali garlande 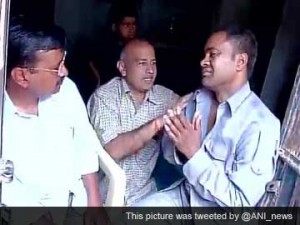 d him and then struck him hard on his left cheek, leaving him with a swollen eye. The 38-year-old was immediately tackled to the ground by AAP supporters and beaten. He was taken to a hospital later. After slapping Mr Kejriwal, Lali had called him a “liar” and accused him of “betraying auto-drivers.” His family said he was an AAP supporter and they did not know why he attacked him.
Mr Kejriwal, who called off his roadshow and meditated at Mahatma Gandhi’s memorial Rajghat after the attack, alleged a larger conspiracy, “Assault me as much as you want, I won’t retaliate. In future, we will have more dangerous and life-threatening attacks, but we must be ready to face them and not retaliate.”
The AAP leader is also meeting Abdul Wahid, 19, who punched him on Friday in Dakshinpuri in south Delhi.
Mr Kejriwal has faced several attacks in the past few weeks. He has earlier had ink, mobil oil and even an egg hurled at him in Varanasi, Uttar Pradesh, where he is contesting against BJP’s prime ministerial candidate Narendra Modi.