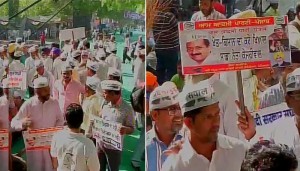 NEW DELHI: The Aam Aadmi Party (AAP) will on Wednesday hold a rally here to oppose the Central government’s Land Acquisition Ordinance.
Reports say AAP chief Arvind Kejriwal has asked the Delhi Police to keep the media away from the protest site.
Farmers from different states are coming to register their protest. If this anti-farmer ordinance is not stopped, then there will be an all-India movement – Ashutosh
The BJP government is pursuing anti-farmer policies because they’ve been obliged by industrial houses and now it is time for the Modi government to pay them back. This is why they are trying to force this anti-farmer ordinance as law, says AAP leader Ashutosh
News agency ANI has reported that the AAP has called off its proposed march to Parliament to oppose the Narendra Modi government’s controversial Land Acquisition Ordinance. The march has been cancelled in view of the Delhi Police denying permission for the march. The rally at Jantar Mantar will, however, go as planned.
The Aam Aadmi Party (AAP) will on Wednesday hold a rally in the capital to oppose the Central government’s Land Acquisition Ordinance.Delhi Chief Minister Arvind Kejriwal will address the rally at Jantar Mantar.
On Tuesday, party leader Sanjay Singh told the media that AAP workers and farmers from across several states, including Odisha, Punjab, Chhattisgarh, Uttar Pradesh, Gujarat, Karnataka, Andhra Pradesh, Jharkhand, Haryana and Rajasthan, would gather at Jantar Mantar at 10 am.
“Kejriwal along with other senior leaders of the party will address the crowd. A procession would then be taken out from the protest site to Parliament,” he said.Singh, however, said that at the moment it was unclear if Kejriwal would march along.
Another AAP leader, Kumar Vishwas said the BJP and Congress did not understand the plight of the poor farmers.”They are not worried about the loss of farmers due to untimely rains. Both the parties are more concerned about their personal conflicts,” he said.
“We will oppose the land ordinance as it is not in favour of the farmers. We conducted a survey in several states and came to know that the farmers are annoyed with the central government because of this land ordinance,” Vishwas said.
“We demand that land ordinance should be rolled back,” he demanded.The AAP has formed a six-member committee to organise the protest.The Congress held its anti-ordinance farmers’ rally on Sunday at the Ramlila Ground.