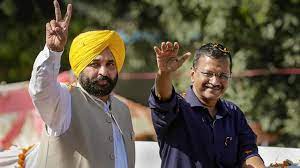 NEW DELHI : Delhi Chief Minister Arvind Kejriwal and his Punjab counterpart Bhagwant Mann will visit Ahmedabad in Gujarat on Sunday. The duo will be holding interactions with the youth, sanitation workers and temporary employees of the Gujarat government.

Every section of the society in Gujarat is looking to the Aam Aadmi Party (AAP) with hope, Kejriwal said. The party is aggressively campaigning in the state, which is the home state of Prime Minister Narendra Modi and union home minister Amit Shah, where polls are due later this year.
“Bhagwant Mann and I will go to Ahmedabad tomorrow. Will interact with youth, safai karamcharis and temporary employees there. Every section of Gujarat considers the Aam Aadmi Party as their hope,” Kejriwal said in a tweet in Hindi today. Of late, the AAP’s national convener has started visiting Gujarat every week to lead his party’s poll campaigns as well as review and fine-tune his party’s poll preparations in the state.
In the state, which is the Bharatiya Janata Party’s bastion, the AAP leader has announced several pre-poll “guarantees” including free electricity up to 300 units, unemployment allowance of Rs 3,000, ten lakh government jobs, free and quality healthcare, free education in state-run schools and Rs 1,000 allowance for women above 18 years of age, if voted to power.
The party with the ‘broom’ symbol is gearing up to contest on all seats in the upcoming Gujarat elections, projecting itself as an alternative to both the ruling BJP and the opposition Congress in the state.  The AAP has so far released the names of 29 candidates in its three lists for the upcoming elections to the 182-member Gujarat Assembly. No other parties have revealed the names of candidates yet.