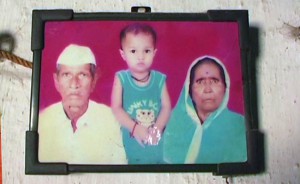 NAGPUR: A 76-year-old soyabean farmer in Maharashtra performed his own last rites by building a pyre in the middle of his fields, climbing atop it and setting it ablaze on Friday last.Kashiram Indore was the 42nd farmer to commit suicide in the state’s drought-ravaged Vidarbha region in the last 50 days.
Kashiram, a resident of Manarkhed village in Akola district, was depressed after his one-acre farm produced only one-and-a half quintals of soyabean this year against the 10 quintals that it could have, his son said. When the standing tuar (a legume) crop too got badly infested with pests, his father could take it no more, he said.
He built the pyre in the middle of the tuar crop and set himself afire, a local policeman said. People rushed to save him, but it was too late, he said.
Rain has been late and scanty this year in Vidarbha and the Maharashtra government has declared over 7,000 villages in the region drought-hit. There is no irrigation system and local farmers say there is no more moisture in the soil to draw from.
Like most years, this has meant that farmers in the region have again been caught in a cycle of drought, crop failure and unpaid loans. Cases of suicide have been on the rise again with desperate debt-ridden farmers unable to return money that they have borrowed.
Kashiram, however, was not in debt, one of his four sons Sarangdhar, 45, said. “My father never borrowed a penny from anyone, he never wished to fall into a debt trap,” he said. His father’s suicide, he said, was brought on by depression at the repeated failure of crop.
A few years ago, Sarangdhar said, his father had given his sons an acre each of land and kept one acre for himself.Over the last decade, more than 10,000 farmers have committed suicide in six of Vidarbha’s drought-hit districts.Maharashtra has sought Rs. 4,000 crore for drought relief from the Centre, but the funds are still awaited.