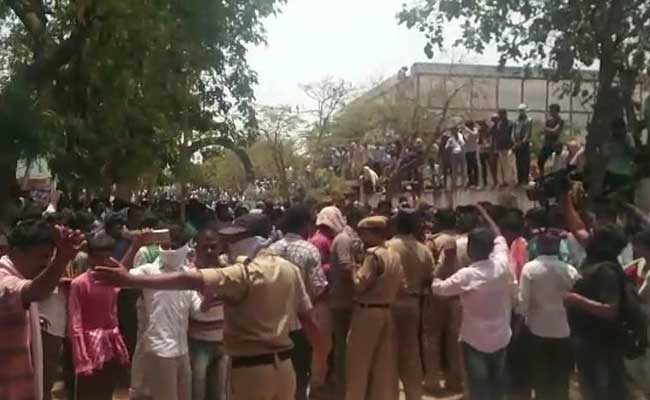 KHAMAM (Telangana): The farmers first sat on a protest, but nobody listened. They then went on a rampage. The Khammam market yard in Telangana looks like there just been a riot there. Farmers who had brought in their chilly produce went on a rampage, breaking air conditioners and ceiling fans, chairs and tables, windows and doors, whatever they could lay their hands on.

Their anger was directed at officials and the government which has failed to respond to their distress call. There has been a bumper crop of chillies this season, which was a reason for happiness. But over the last several weeks the prices have progressively crashed and today they were at less than Rs. 3,000 a quintal.
That meant every single farmer would be pushed into debts. “We invested upto one lakh rupees an acre. Now I won’t even recover 30,000 rupees,” cried a farmer Narasimha.Gontha Mohan said he had been waiting for days to sell his produce but there were few buyers. At home, his family was waiting for him to get home with money. There were moneylenders who needed to be paid back and interest costs were skyrocketing.
The farmers had sat on a protest but no one really bothered. That eventually angered them and they attacked the market chairman’s office, vandalising all that they found there. They even set chilly sacks on fire, sending everyone into a bout of coughing and sneezing.”This is what we are going through. Not able to stand where we are but no one is bothered,” complained farmer Mangalaiah.

Chief Minister K Chandrasekhar Rao had said he was taking up the issue with the centre and also that the support price being offered in Telangana is the highest anywhere in the country. In neighbouring Andhra Pradesh, where farmers also were in a huge crisis, chief minister Chandrababu Naidu announced Rs. 1,500 per quintal additionally to every farmer, to help them cope with the low prices.

Huge police deployment at the market yard ensured things came under control. The police and revenue authorities, however, were cautious about not registering a case about ransacking and destroying public property as they know that at this time it is a sensitive issue. “The market yard officials have not given us any formal complaint. We are examining whether a case of rioting and attacking public property needs to be booked,” police officials said.