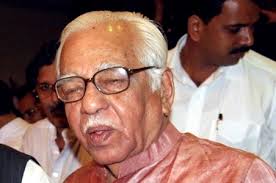 NEW DELHI : Stirring a new controversy in the middle of a row over religious conversions, Uttar Pradesh Governor Ram Naik has said a Ram temple should be built in Ayodhya soon as “it is the wish of Indian citizens.”
“The Ram Temple should be built as soon as possible, this is what the people of this country want and their wishes should be fulfilled,” Mr Naik, 80, said at an event at Awadh University in Faizabad near Ayodhya, home to the decades-old dispute over the razed Babri mosque site that many Hindus believe was the birthplace of Lord Ram.Asked to clarify, Mr Naik repeated his words to the media.
Trinamool Congress parliamentarian Derek O’Brien told , “The governor of Uttar Pradesh has said every Indian wants a Ram Mandir. Do you expect Parliament to run with a statement like that from a Governor?”
Mr Naik has been accused of making inappropriately political statements earlier too.Last month, on a visit to Ayodhya for an event organised by the Vishwa Hindu Parishad, he had reportedly said that the temple-mosque row could be resolved within five years as Prime Minister Narendra Modi was working out a plan.
Mr Naik, a former BJP parliamentarian and union minister, was appointed governor to Uttar Pradesh in July as part of a series of switches in top posts after the BJP came to power.
His comment adds to a raging row over religious conversions in Agra, allegedly by groups linked to the BJP’s ideological mentor Rashtriya Swayamsevak Sangh, which has had the government confronting an angry opposition in Parliament. Statements by BJP MP Yogi Adityanath, announcing a bigger conversion programme in Aligarh on December 25, have not helped.
Defending Mr Naik, BJP spokesperson Siddharth Nath Singh today said, “Is it wrong to take Ram’s name?  Is it wrong to construct Ram’s temple? Is the belief of millions in Lord Ram is wrong?  Opposition should raise valid issues before the public and not spread propaganda.”