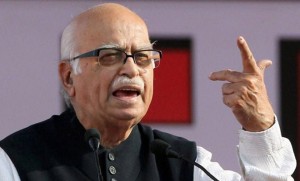 NEW DELHI : After playing hard ball for over 24 hours, BJP patriarch Lal Krishan Advani finally agrees to the party’s decision to contest from Gandhinagar constituency in the upcoming Lok Sabha election  according to the sources.
Advani had been adamant that he wants to contest from Bhopal in Madhya Pradesh and not from Gandhinagar, a seat he has held for the last 16 years. His aversion to trying his luck from the capital of Gujarat was being attributed to his fear that the local party machinery there would not support him wholeheartedly given his edgy relationship with Narendra Modi.
The BJP top brass had to put all its might to convince Advani to go by what the party had decided for him.Leading from the front in the endeavour was prime ministerial candidate Narendra Modi. The Gujarat Chief Minister drove down to Advani’s residence this morning to convince him to stick to Gandhinagar