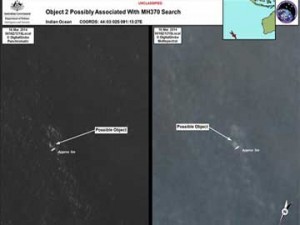 KUALA LUMPUR:  Malaysia said on Thursday that two objects spotted by a satellite in the Indian Ocean were a “credible lead” in the search for a missing Malaysia Airlines passenger jet”We now have a credible lead,” Transport Minister Hishammuddin Hussein told reporters at Kuala Lumpur International Airport.
This “requires us overnight to verify and corroborate it,” Hishammuddin said, adding that the overall search and rescue effort for Flight 370 would continue in the meantime.
Currently, there are 18 ships, 29 aircraft and six ship-borne helicopters deployed in the search along two corridors stretching from the southern Indian Ocean to South and Central Asia.”Until we are certain that we have located MH370, search and rescue operations will continue in both corridors,” Hishammuddin said. “For families around the world, the one piece of information they want most is the information we just don’t have: the location of MH370,” he added.