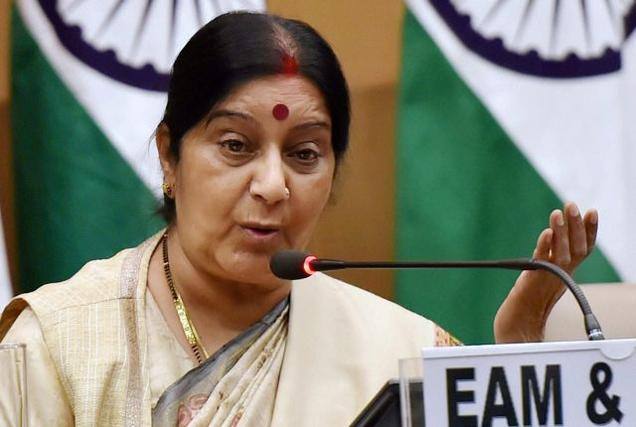 MUMBAI: As many as 80,000 distressed Indians were rescued safely from different countries in three years since the NDA government led by Prime Minister Narendra Modi took office, External Affairs Minister Sushma Swaraj said on Sunday.
“The MEA now has a humane face… Earlier, we kept hearing that even if there are a couple of their citizens in distress, countries like the United States and Israel would rescue them from anywhere. It is heartening to share that we have rescued 80,000 Indians in three years,” Swaraj said.

She was speaking at the inauguration of the country’s first Videsh Bhavan, assimilating all Regional Passport Offices and allied departments under a single roof at the Bandra Kurla Complex (BKC) here.Swaraj said the government had brought in several changes due to which “India has emerged as an influential and sensitive state across the world”.On the issue of passports, she reiterated the government’s resolve for effective and speedy service delivery.

“Till 2014, only 77 Passport Seva Kendras were operating in the country. Now, 251 such centres are working, of which 235 were made functional in the last six months.”On the efforts to streamline procedures for issuance of passports, she said many rules that created hurdles in this regard have been discarded and made more relevant to the present times.
“Earlier, orphans without birth certificate were not entitled to passports. Similarly was the case for divorcees. We have changed the rules to make them more citizen-friendly.”Maharashtra Chief Minister Devendra Fadnavis said it is the first Videsh Bhavan of the country and “will be a model for other states to follow”.
“Being an international-class city, Mumbai works very closely with the MEA and the Videsh Bhavan will help even more in this regard,” he said.Under a pilot project, four offices of MEA — Regional Passport Office, Protector of Emigrants office, Branch Secretariat and the Indian Council for Cultural Relations’ Regional Office — have been integrated and brought under one roof at the state-of-art office in BKC, Regional Passport Officer Swati Kulkarni said.
Earlier, Sushma Swaraj lit the ceremonial lamp to inaugurate the Videsh Bhavan in the presence of Minister of State for External Affairs Gen VK Singh (retd), Fadnavis, and Administrator of Union Territories of Daman and Diu and Dadra and Nagar Haveli Praful Patel, besides other dignitaries.

The inauguration follows the shifting of the RPO from its Worli premises to the Videsh Bhavan from August 14 and merging of the Thane and Mumbai RPOs from August 21, which have already become functional.The existing Passport Seva Kendras in Thane, Thane-II, Malad (Mumbai) and Nashik will continue to function from their existing locations but under the administrative jurisdiction of the RPO Mumbai.zeenews.