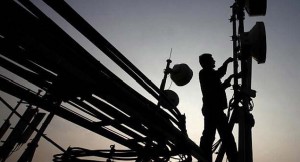 NEW DELHI : Eyeing a record high spectrum sale of Rs one lakh crore, the government today fixed the base price for 3G auction at Rs 3,705 per mega hertz — which itself can fetch over Rs 17,000 crore from this band.
Along with the spectrum in 2,100 MHz band, which is used to offer 3G services, the government will also offer the second generation or 2G mobile airwaves in three different bands in an auction scheduled for March 4.
While the auction of these 2G and 3G airwaves could garner Rs 82,395 crore at the base or minimum price, sources said the government expects the total proceeds to exceed Rs one lakh crore.
The Union Cabinet, headed by Prime Minister Narendra Modi, today approved the minimum or auction start price for airwaves in 2,100 Mega-Hertz band or 3G spectrum, which will garner at least Rs 17,555 crore, Telecom Minister Ravi Shankar Prasad told reporters here after the meeting.
Previously, it had approved reserve price for auction of 2G spectrum in 800 MHz, 900 Mhz and 1800 MHz bands that at the minimum rate set would get the government Rs 64,840 crore.
Of these, the government will get Rs 16,000 crore from 2G spectrum sale and Rs 5,793 crore on 3G airwaves this fiscal and the remainder will flow in later.
“This time the reserve price is Rs 3,705 crore per MHz for 2100 Mhz. We have taken into account the market potential of this band,” he said.
The Cabinet had approved a base price of Rs 3,646 crore pan-India per MHz in 800 MHz, Rs 3,980 crore for 900 MHz band pan India excluding Delhi, Mumbai, Kolkata and J&K and Rs 2,191 crore pan India (excluding Maharashtra and West Bengal) in 1800 MHz band.
According to sources, the combined proceeds from auction of all the four bands are estimated by the government at over Rs 1,00,000 crore — making it the biggest ever spectrum sale.
Prasad said in 2010 auction of 3G airwaves, Rs 700 crore per MHz was determined as the reserve price and in the auction, the government earned Rs 3,350 crore per MHz, which was almost 8-times the price.
On industry’s demand that more spectrum should be made available in 2100 MHz band, Prasad said: “I’m surprised to see a kind of campaign going on spectrum deficit. That is not a fact. The spectrum presently available is being released for auction and in the government’s considered view, it is adequate.”
He added whatever spectrum shall further become available, shall be released again for auction.Prasad said 15 Mhz of 3G spectrum will be again put up for auction after DoT gets it from Defence Ministry through swapping.
On spectrum sharing and trading guidelines, Prasad said: “As I told you earlier, spectrum sharing and spectrum trading guidelines are being finalised. There is a process. It will go to the Trai, come to us…We will take a call and that will also be notified.”
The inter-ministerial panel Telecom Commission had suggested a base price of Rs 3,705 crore per MHz as 3G spectrum base price for the auction scheduled for March 4.
The base price suggested by the Commission is around 11 per cent higher than what telecom firms paid for in the 2010 auction. It is also 36 per cent higher than sectoral regulator TRAI’s recommendation of Rs 2,720 crore per Mhz.
The Cabinet in its meeting on January 5 had approved that 5 MHz in 2100 MHz band would be put up for sale in the upcoming auction but the pricing was not decided at that time.The Defence Ministry has agreed to release 5 Mhz in 2100 Mhz band in 17 circles.
Last week, the Cabinet had approved swapping of 15 MHz of 3G spectrum between Defence and the Telecom Ministry. However, government will be able to provide it after completion of the harmonisation process.
The Telecom Ministry has proposed to exchange 15 Mhz spectrum it holds in 1900 Mhz band with same quantum of radio waves held by Defence in 2100 Mhz.The Cabinet has asked ministries involved in the process to complete harmonisation within a year