LUCKNOW: Yoga guru Baba Ramdev today apologised for his “honeymoon” remark against Congress Vice President Rahul Gandhi that has sparked a major controversy. Mr Ramdev was booked for those remarks earlier in the day.Addressing a gathering in Lucknow yesterday, Mr Ramdev had said, “He (Rahul) goes to houses of Dalits for honeymoon and picnic… His mother told him that if he marries a foreigner, he won’t become the PM.  He does not want to marry an Indian girl. His mother wants him to first become PM and then marry a foreigner.” 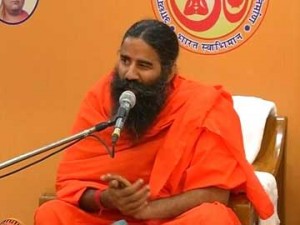 Claiming that he was misinterpreted, the 43-year-old yoga guru today said, “I did not mean to insult Rahul Gandhi or Dalits. Rahul Gandhi indulges in publicity with photos of him sitting in the homes of Dalits. If my statement hurts the Dalits, I regret it”.The apology comes after the Congress severely condemned Mr Ramdev for what it said are “anti-Dalit” remarks. Mr Gandhi’s sister, Priyanka Gandhi Vadra, who has aggressively hit out at opponents recently for attacking her family, said, “I will not respond to such vileness.”
Acting on a complaint, the police today charged Mr Ramdev under Section 171G of the Indian Penal Code (IPC) for making “false statement with intent to affect the result of an election”.Some Dalit activists, also upset with the comments, had also reportedly filed complaints with the National Commission for Scheduled Castes and the National Commission for Women.
Mr Ramdev, who has often declared his support for BJP’s prime ministerial candidate Narendra Modi, also refuted Congress’ allegations that he was campaigning for the BJP at his yoga camps.