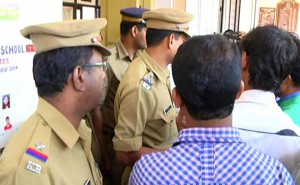 KOZHIKODE: Nearly 250 children were allegedly locked up in the conference hall of a school in Kerala for over two hours on Tuesday.
The principal of the Hilltop Public High School in Kozhikode, Abdul Rahman, was arrested and is now out on bail.
He claims he called the children to the hall as they did not pay the fees.”Usually, when children don’t pay the fees, the teachers call them individually and speak to them. Then the parents are called. In this case since there were so many children, in order to avoid disturbance to other students, we called all the students who didn’t pay fees into the conference hall,” said Mr Rahman.
Furious parents met Chief Minister Oommen Chandy yesterday and demanded strong action.The conference hall had an asbestos ceiling and no fan, and the students were not let out even to use the toilet. Two students were taken to the hospital after they fainted.
“We were told by the principal that if we didn’t get the fees tomorrow, he would keep us standing outside for all the seven periods. We did not even have a fan,” said Jamima Haider, a student.
J Jabbar, another student’s father said, “Most of the parents had decided not to pay the fees because it was the last semester and the school gave us a notice that it would shut down soon. Over two hundred children were locked inside the hall without being allowed to go the bathroom.”
The notice from the school management to parents in December said the school would be shut down  because of the “impossibility to secure the required additional land for the school in and around the present campus.”
The police say they are investigating what happened. “There seems to be some issue between parents and the management of the school regarding the shifting of school complex. But the allegation is serious,” said a senior police officer.