Pakistan are a man short with Ahmed Shehzad going to miss the rest of the series with a fractured skull. Azhar Ali will come out alongside Hafeez, as the duo will try to negate the first session. 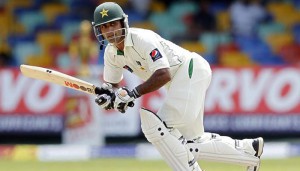 NEW DELHI : The Pakistani players have been on the same ruthless vein just as they were against Australia which saw them win the two-match Test series 2-0. Pakistan had a big 304 run lead and despite their opponents falling 105 runs short of the follow-on mark, the hosts batted again and finished the third day at 15-
Mohammad Hafeez (five) and Azhar Ali (nine) were at the crease as Pakistan led by 319 runs with two days left to push for a 1-0 lead in the three-match series.
Pakistan had declared their first innings at 566-3.
New Zealand opener Tom Latham hit a maiden hundred yesterday but impressive bowling performances by Rahat Ali (4-22) and spinner Zulfiqar Babar (3-79) saw the visitors getting choked.
Day four promises to be an interesting day as Pak will try to score quickly and set a daunting target for the Kiwis.