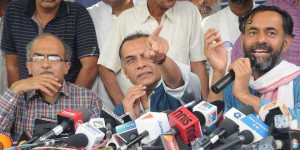 NEW DELHI: The Aam Aadmi Party’s bitter feud exploded at a meeting held near Delhi today where rebel founder members Yogendra Yadav and Prashant Bhushan were dropped from an important panel in what presages their possible exit from the party for challenging chief Arvind Kejriwal.
AAP’s National Council, comprising 400 members, met at a resort and decided to expel Mr Yadav and Mr Bhushan from the party’s National Executive in a vote described by the rebels as “murder of democracy.”
“It was all scripted,” said Mr Yadav, alleging that “bouncers” dragged his supporters out of the meeting so that Mr Kejriwal’s loyalists would prevail.”There was no discussion, no secret ballot,” Mr Yadav said. Mr Bhushan alleged “goondagardi (hooliganism)” by AAP’s lawmakers.
Mr Kejriwal, chief minister of Delhi, reportedly made an emotional speech but left before the vote.Sources say after today’s decision, the party’s disciplinary committee is expected to take a call on the future of the rebels.This morning, Mr Yadav sat on protest outside the meeting venue with his supporters, alleging that “legitimate members” were not being allowed inside.
Mr Yadav appeared virtually isolated as a sea of AAP workers blocked roads outside the meeting venue raising slogans and holding up placards in support of Mr Kejriwal.On Friday, a secretly-taped phone conversation was leaked, in which Mr Kejriwal is heard abusing Mr Bhushan and Mr Yadav and threatening to exit the party with his 67 lawmakers from Delhi.
“Any other party would have thrown them out,” Mr Kejriwal can be heard saying to a supporter.Mr Yadav and Mr Bhushan were recently sacked from a key decision-making panel of AAP.
They claim they are being forced out of the party for demanding more transparency and internal democracy.AAP says 10 days of negotiations have failed to bridge the gap that emerged after the party’s disastrous national election debut last year and that has widened in the days since the party scored a massive victory in the Delhi election.