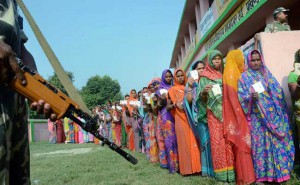 MUZAFFARPUR: Jasiya Devi, 28, is excited about voting when elections are held in her village in Muzaffarpur on November 1, the fourth of five phases of polling in Bihar. She believes women like her have the attention of political parties at last.
“I am the owner of one vote and I will use it.  How about giving women some employment in small scale industries like agarbatti (incense sticks)? That would be great,” says Jasiya Devi, who is a daily wager.
Women make up 46 per cent of Bihar’s electorate, a statistic reflected in the distinctly women-centric promises made by both Chief Minister Nitish Kumar, who is seeking a third straight term, and Prime Minister Narendra Modi, who is leading the BJP’s campaign.
On Monday, the highlight of the first phase of the Bihar assembly election was a record turnout of women voters at 59.5 per cent as compared to 54.5 per cent men. Both camps immediately claimed that meant an advantage for them.
Nitish Kumar, seen as popular with women voters, has been trying to cultivate them as a caste-neutral constituency in Bihar for some time now. In his decade long run as Chief Minister, he launched a number of schemes, including the very popular cycle scheme for girl students. He also ensured 50 per cent reservation in panchayat bodies and has promised women 35 per cent reservation in government jobs.
The BJP has sought to remind voters that the decisions to empower women were taken when it governed the state in partnership with Nitish Kumar’s Janata Dal United. In an attempt to upstage his flagship scheme, it has promised to replace cycles with scooties for girl students.
The BJP has also promised improvement in law and order so that women feel more secure in Bihar.The second phase of polling will be held tomorrow in 32 Bihar constituencies. Most of these seats were held by the JDU, but it had fought the last election as a partner of the BJP.
This year the two parties face off in a contest that has so far been described as neck and neck. While Nitish Kumar leads an alliance with Lalu Yadav and the Congress, the BJP has tied up with three regional parties.