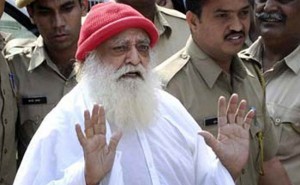 MUZAFFARNAGAR: A witness in a rape case against spiritual guru Asaram Bapu was shot dead in Uttar Pradesh’s Muzaffarnagar on Sunday.
Police said Akhil Gupta, 35, was shot by unknown persons on his way home. He is the second witness to be killed in the case after Amrut Prajapati, a former Asaram aide who was shot dead in June last year in Gujarat.
Mr Gupta was a cook and personal aide of Asaram Bapu, who has been in jail since August, 2013, for allegedly sexually assaulting a schoolgirl. Since then, he has been booked, along with his son, for the alleged rape of two sisters in Surat in Gujarat.
Mr Gupta had been questioned by the Gujarat Police in 2013 and had reportedly given a statement against the self-styled godman who runs over 400 ashrams across India.
The Surat-based sisters have accused Asaram and his son Narayan Sai of raping them when they stayed at his ashrams in Ahmedabad and Surat between 1997 and 2006.
One of the women had approached the court recently for permission to change her earlier statement, raising speculation that there was pressure on the complainants and witnesses. The court rejected her request.