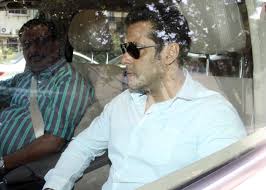 MUMBAI: The Bombay High Court on Monday dismissed an application filed by actor Salman Khan, sentenced to five-year jail term in the 2002 hit-and-run case, seeking examination of his friend and singer Kamaal Khan as a witness by the prosecution.

Salman Khan had on November 16 filed the application before Justice A R Joshi who is hearing the actor’s appeal against the conviction and sentence handed over to him by a sessions court in connection with the case. Under section 391 of Criminal Procedure Code, the high court can summon a witness while hearing an appeal “if it thinks additional evidence to be necessary”.
Justice Joshi today, however, refused to summon Kamaal and said “recourse to section 391 is taken only in special cases where circumstances specially warrant it. There is nothing in the present case to entertain the application filed by the appellant (Salman) and summon Kamaal Khan.” “There is nothing to show that but for the substantial evidence of Kamaal Khan no decision can be taken in the appeal. If there is no dire need for the examination of Kamaal Khan and if the material available can be analysed in itself, then in the considered view of this court recourse to section 391 is not the ultimate requirement,” Justice Joshi said.
The Court also took note of the fact that when the prosecution told the sessions court during examination of all its witnesses that Kamaal Khan could not be traced, Salman did not take any step at that stage.
“The appellant (Salman) chose to call Ashok Singh as defence witness at the fag end of the trial before the sessions court. He (Salman), however, did not take any steps to call Kamaal Khan as defence witness,” the court said.
Kamaal Khan, who according to the prosecution and defence was present in the car prior to and at the time of the accident in September 2002, had not appeared before the magistrate court for recording his evidence. Only his statement was recorded by the police in 2002 under section 161 of CrPC.  Justice Joshi said he would continue hearing arguments of the prosecution in the appeal filed by Salman from tomorrow.
Senior counsel Amit Desai, appearing for Salman, sought a copy of the order passed by the court today, hinting that they would approach the Supreme Court.
“Why the prosecution had not examined this witness in the trial court?… Kamaal Khan is the best eyewitness available to the prosecution as he was present in Salman’s car on September 28, 2002, when it rammed into a shop in Bandra killing one person and injuring four others,” Desai had argued.
Kamaal can throw light on who was driving the car, the lawyer had said. Salman’s counsel has been saying that it was his driver Ashok Singh who was behind the wheel.
Other eyewitness, Salman’s police bodyguard Ravindra Patil died during the trial in 2007. The prosecution relied on his statement before the magistrate implicated Salman but as the defence couldn’t cross-examine him, it caused prejudice to the actor, advocate Desai said.
The trial court had on May 6 held Salman guilty of culpable homicide not amounting to murder, upholding the police’s case that he was drunk and was driving the car when the accident took place in suburban Bandra. Salman was convicted for ramming his car into a Bandra shop on September 28, 2002