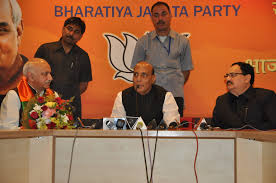 NEW DELHI : Starting Wednesday, a Union minister will be present every day at the BJP headquarters in Delhi to ensure that the party and the government are in sync on important policies, a move initiated by Prime Minister Narendra Modi. BJP workers will also have easy access to ministers so that they can provide feedback on constituencies all over the country.
The roster for this week is ready. First up, on Wednesday, is P Radhakrishnan, Union Minister of State for Heavy Industries, who will visit the party office between 4 and 6 pm. On Thursday, Minister of State for Food Processing Sanjeev Kumar Baliyan will hold office hours, while Commerce Minister Nirmala Sitharaman will be available on Friday.
Each Minister will be at the party office once every month and hear party leaders. But it remains to be seen whether the ministers are asked to liaise with party workers on all seven days in a week. Some ministers have reportedly expressed their desire to carry out the Prime Minister’s diktat only during the weekdays.
The exercise was debuted by Prime Minister Atal Bihari Vajpayee when the BJP-led national coalition was last in power.
A weekly coordination meeting between ministers and party spokespersons, an initiative that began three weeks ago, will be held tomorrow. Finance Minister Arun Jaitley will preside. At the last meeting, sources say, it was decided that ministers who are absent will be listed for the Prime Minister’s review.