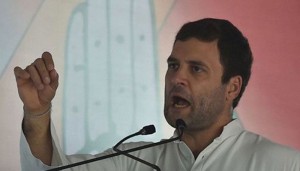 In an apparent reference to the Prime Minister, Rahul quoted one of the economists as saying that ‘he used to think that thieves come at night, but now he has realised that bigger thieves come in broad daylight wearing suits.’
Speaking in the Lok Sabha, the Congress leader said his party will oppose the bill tooth and nail.“If we can’t stop you in Parliament, we will stop you on streets,” Rahul exhorted.“Will not allow suit-boot ki sarkaar,” Rahul added.
Terming the Modi government as anti-poor, the Amethi MP said the central government doesn’t care for the poor and is working for its industrialist friends.The Gandhi scion further questioned the NDA government, saying what is the urgency to pass the bill when only eight out of 100 projects are pending due to land issue.
The Congress leader accused the BJP-led NDA government of  murdering the land bill passed during UPA regime.When 40 percent of the land is lying unused in Special Economic Zones (SEZs), why does the Centre wants farmers’ land, asked Rahul.
He accused the Modi government of diluting the land bill by deleting the consent clause. “Our government had said there must be social impact assessment, and farmers should be consulted before acquiring land, but the present government has removed such clauses.”
The controversial land acquisition bill was introduced in the Lok Sabha on Monday amid strong protests by the Opposition which termed the measure ‘anti-farmer’, as members of Congress and some other parties staged a walkout.
The government tabled the bill after Speaker Sumitra Mahajan rejected the contention of parties like Congress, TMC, BJD, the Left and others, that a similar measure was “pending” in the Rajya Sabha.