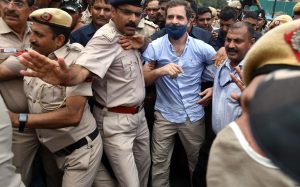 NEW DELHI: Rahul Gandhi, Priyanka Gandhi Vadra and other Congress leaders were detained by the Delhi Police when he was protesting with other Congress leaders outside the party headquarters. They are being kept at Police Lines in Delhi’s Kingsway Camp. Ahead of the protest, Rahul Gandhi said, “We’re witnessing the death of democracy. What India has built brick by brick, starting almost a century ago, is being destroyed in front of your eyes. Anybody who stands against this idea of onset of dictatorship is viciously attacked, jailed, arrested and beaten up.”

“All Congress MPs were marching towards Rashtrapati Bhawan to raise the issue of inflation and price rise but they are not allowing us to go ahead from here. Our job is to raise the issues of the people… Some MPs were detained, and also beaten,” said Congress MP Rahul Gandhi at Vijay Chowk.Mr Gandhi claimed that the sole agenda of the government is that people’s issues such as price rise, unemployment and violence in society must not be raised. Several Congress leaders, including Rahul Gandhi and Priyanka Gandhi Vadra, were detained amid a massive protest outside the party’s Delhi headquarters against rising prices, unemployment and GST hike on essential items.
Led by party chief Sonia Gandhi and Rahul Gandhi, Congress MPs today wore black clothes in Parliament to protest against the rising prices and unemployment. Rajya Sabha proceedings were adjourned today as Congress members created an uproar over the alleged misuse of probe agencies by the government. Congress Working Committee (CWC) members and senior leaders had planned to take part in “PM House gherao” while Lok Sabha and Rajya Sabha MPs will hold a “Chalo Rashtrapati Bhavan” from Parliament, the party said in a statement.

The administration imposed prohibitory orders banning large gatherings in parts of Delhi ahead of the Congress march. Delhi police had denied permission to the Congress for holding a protest in the national capital. The BJP hit back, asking if there is “democracy” in the Congress, which has been labelled a dynastic party. Earlier, Rahul Gandhi and Rajasthan Chief Minister Ashok Gehlot, along with other top leaders, had reached the party headquarters in the morning. The party leaders, including MPs, are wearing black bands on their arms as a mark of protest.

“Today people are being trampled upon by inflation, there is trouble in the country. But the government doesn’t bother,” said Congress MP Manish Tewari. Congress MP and senior leader P Chidambaram said, “This protest is about price rise and Agnipath.. As elected representatives we are bound to voice the grievances the burdens and the fears of the people. This is what we are doing.”

Congress leader Rahul Gandhi alleged that India is witnessing the “death of democracy” and anybody who raises people’s issues and stands against the onset of dictatorship is “viciously attacked” and put in jail. “There is no democracy in India and there is a dictatorship of four people,” Rahul Gandhi alleged. “What we are witnessing is the death of democracy. That is what India is witnessing. What India has built brick by brick, is basically being destroyed in front of your eyes,” He also alleged that the government is being run to protect the interests of four-five people and this “dictatorship” is being run in the interest of “two-three big business people by two people”.

Congress interim President Sonia Gandhi joined the protest as did Congress General Secretary Priyanka Gandhi Vadra. “Inflation has risen beyond the limit; the government will have to do something about it. This is why we’re fighting,” Priyanka said. She sat on a protest with other leaders and workers of the party outside the AICC headquarters. “We are protesting peacefully against inflation, price rise, unemployment, GST rate hike among other issues,” said Leader of Opposition in Rajya Sabha, Mallikarjun Kharge during Congress protest at Vijay Chowk, Delhi.
(With Bureau Report ).