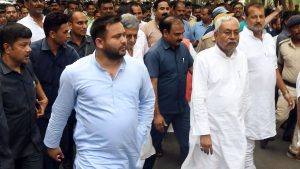 NEW DELHI:  Hours after dumping the BJP to get back with the RJD, Bihar Chief Minister today said the new ‘Mahagathbandhan’ or Grand Alliance has seven partners, and thus the numbers to take power. “We have 164 MLAs, who have all signed the letter of support,” he said after meeting the Governor, with RJD’s Tejashwi Yadav by his side.