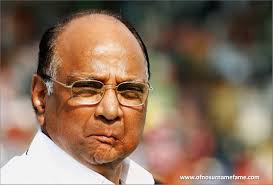 MUMBAI : NCP chief Sharad Pawar is in trouble over his remark bogus voting remark. The Maharashtra Election Commission has now asked for a copy of his remark on a CD.This came after Bharatiya Janata Party’s Kirit Somaiya wrote to the Election Commission asking it to probe Sharad Pawar’s comments on voting from two constituencies.
The Aam Aadmi Party is also expected to file a complaint with the EC on Monday. This came hours after NCP chief Sharad Pawar asked voters to take advantage of the multi-phase polling in Maharashtra by voting twice.He was later forced to clarify and said that his comment was misunderstood and that since he wasn’t addressing a public meet, he has not violated any election rules. He went on to say that his comment was made in jest.
Pawar had on Saturday urged his supporters to exploit the fact that voting in Mumbai and Satara would take place on two separate days, asking them to ensure they vote for the NCP in both the constituencies.
He also cautioned voters to ensure they wipe off the ink on their index fingers before they cast their second vote. “Last time (in 2009), the polling in Satara and Mumbai was on the same day and people went to their hometowns. But this time, polling in Satara is on 17 April and here on 24 April,” Pawar told the gathering of the workers who hailed from Satara district in Western Maharashtra. “Vote for the ‘clock’ (NCP symbol) there (in Satara) and come back to vote for the ‘clock’ here as well,” he said, to loud laughs at the gathering held in the APMC market.
Pawar, however, later told reporters in Mumbai that his statement was made in “a lighter vein and had a tinge of satire to it”. “Party workers get bored by same cliched electoral speeches.The statement which I made earlier in the day was in a lighter vein,” the NCP chief said in suburban Bhandup where he was campaigning for party candidate Sanjay Dina Patil who is contesting from the Mumbai North East seat.
“My statement should not be misinterpreted. Bogus voting does not take place in our state,” he said.Pawar, the student union activist-turned-national leader, however, asked party leaders to circumspect before delivering any speech. “All leaders should be careful while delivering their speech. They should see there is no slip of tongue,” he said.Later in the evening, Pawar hurriedly called a press conference to say that the controversy should now be put to rest. “Firstly, I was not addressing any public or election meeting.
It was a meeting on the occasion of the 32nd death anniversary of the late Annasaheb Patil, where mathadi workers had assembled to pay homage to the departed leader,” he said “Secondly, my statement was simply a joke and not at all suggested commission of any act violative of the election laws or rules,” Pawar said“After learning that my statement was being misinterpreted and blown out of proportion by our political opponents, I immediately clarified…” he added.