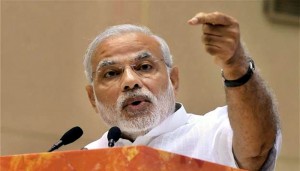 NEW DELHI: Prime Minister Narendra Modi on Sunday said it was the collective responsibility of all parties to run the House as the government called for an all-party meeting ahead of the Budget session beginning Monday.
After the all-party meeting, Modi said, “The country looks at Budget session with hopes and aspirations. It is collective responsibility of all parties to ensure it runs smoothly.”
“I assure all parties that issues raised by them will be taken up for discussion in Parliament,” he said while talking of the contentious bills that are to be presented in the Parliament.
Ahead of the all-party meet, Parliamentary Affairs Minister M Venkaiah Naidu met Congress President Sonia Gandhi in an apparent attempt to seek cooperation of the largest opposition party which the government will require particularly in the Rajya Sabha for conversion of Ordinances into Acts.He described the meeting as “good”.
Later, he hosted a meeting of leaders of all parties in both Houses of Parliament and emphasised the need for a spirit of mutual cooperation during the Budget session beginning tomorrow. “The government is always willing to sit with opposition to resolve differences on any issue… A spirit of mutual cooperation is required to ensure productive budget session,” he said.
Referring to the controversy over Land Acquisition Ordinance, he said the issue needs to be addressed “sincerely” without politicisation.”We are aware that land acquisition is an emotive issue as it concerns farmers. We need to address this issue sincerely without undue politicisation,” the Minister said.
Lok Sabha Speaker Sumitra Mahajan has also called a meeting today evening of leaders of parties in the house to ensure its smooth functioning.The government’s agenda includes 44 items of financial, legislative and non-legislative business.
The session will begin with President Pranab Mukherjee’s address to members of both houses of parliament.The NDA government will find it tough to get bills replacing six ordinances passed.
The government faces an uphill task in getting the bills aimed at replacing ordinances passed as opposition parties have conveyed their firm stand against some of them including the land acquisition ordinance.
Though the government has held back channel discussions on contentious bills with leaders of opposition parties, there is no sign of a breakthrough so far.
An official release said that the financial business (11 items) include presentation of and discussion on general and railway budget, voting on demands for grants, supplementary demands for grants for 2014-15 and excess demands, if any, for 2013-14. The rail budget will be presented Feb 26, Economic Survey Feb 27 and general budget Feb 28.
The legislative agenda comprises introduction, consideration and passing of seven new bills by both the houses including the Finance Bill, 2015 and bills replacing the six ordinances.
While 10 new bills are slated to be introduced, the government’s agenda includes passing of three bills pending in the Lok Sabha and seven in the Rajya Sabha. Those pending in the Lok Sabha are: The Constitution (122nd Amendment) Bill, 2014 relating to introduction of GST, The Lok Pal and Lok Ayuktas and other Related Law (Amendment) Bill, 2014 and The Repealing and Amending Bill, 2014. After being passed by the Lok Sabha, these bills will be taken up by the Rajya Sabha.
Bills pending in the Rajya Sabha include four bills already passed by Lok Sabha – The Companies (Amendment) Bill, 2014, The Public Premises Eviction of Unauthorised Occupants) Amendment Bill, 2014, The Regional Rural Banks (Amendment) Bill, 2014, The Repealing and Amending (Second) Bill, 2014, and the Payments and Settlement Systems(Amendment) Bill, 2014.
Other pending bills are: The Prevention of Corruption (Amendment) Bill,2013 and The Constitution (Scheduled Casts) Orders (Amendment) Bill, 2014.
The new bills pertain to on the National Cooperative Development Corporation, the Warehousing Corporation, Andhra Pradesh reorganisation, arbitration and conciliation, repeal of appropriation acts, registration of births and deaths, whistle blowers protection, Indian Institutes of Management, National Academic Depository and Identification of Scheduled Castes.
The non-legislative business for the session includes discussion on the motion of thanks to the President’s address.The first part of the session will continue till March 20. The second part will commence after a month-long recess from April 20 and conclude May 8.
There will be 20 working days during the first half of budget session and 13 in the second half.
During the intervening recess, standing committees will take up detailed examination of the demands for grants of different ministries.
Gandhian Anna Hazare is also scheduled to hold a protest against the land acquisition ordinance from Monday at Jantar Mantar. Congress vice-president Rahul Gandhi is expected to join protest by the party against the ordinance.
Janata Dal-United leader KC Tyagi said “morale of opposition will be high” following defeat of Bharatiya Janata Party in the Delhi elections.