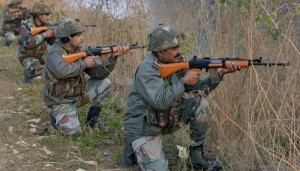 PATHANKOT/ NEW DELHI : Intermittent gunfire continued till late evening on Sunday – the second straight day of operations at the Pathankot air base. A fifth terrorist was neutralized today, hunt is on for the other one.
Prime Minister Narendra Modi, who was in Bengaluru to open a yoga conference, chaired a meeting with the National Security Advisor, foreign secretary and other officials on Pathankot.

Admitting that two terrorists had been holed up at the Pathankot base since yesterday, Air Force authorities said they hoped to wrap up the operation by evening. “In the morning, we realised that two more terrorists were there.
The operation at a mature state but the confirmation can be given only on recovering the bodies,” said Air Marshal Anil Khosla. Foreign minister Sushma Swaraj met a group of diplomats to chalk out a strategy on Pakistan. Coming a week after PM Modi’s “spontaneous” visit to Pakistan, the attack has triggered a debate over ties with the neighbouring country.
Gunfire stopped in the evening at the air base — from where Russian-made fleet of MiG-21 fighter jets and Mi-35 attack helicopters fly. But the operation is still continuing. The number of casualties has gone up to 7, with three more security personnel dying in hospital.
This morning, an officer died in a blast from an Improvised Explosive Device during combing operations. Twenty security personnel have been injured. Among the weapons recovered were AK 47s, mortars, grenade launchers and Global Positioning System devices.
The probe has been handed over to the National Investigation Agency. Opposition Congress has said India should reassess its position on Pakistan. Former chief minister of Jammu and Kashmir Omar Abdullah called the attack “the first major challenge to PM Modi’s bold Pakistan gambit.
” The gun-battle started at 3.30 am on Saturday. The armed forces – which had secured the compound following intelligence warning – had detected the advent of terrorists with the help of aircraft using thermal imaging capability.
The army wrested control of the base yesterday with the help of attack helicopters, mine-proof and bullet-proof personnel carriers. Four terrorists were killed yesterday after the day-long gun-battle. Vital air force assets — MiG-21 Bison fighters and Mi-35 attack helicopters – were safe following advance intelligence about the attack.