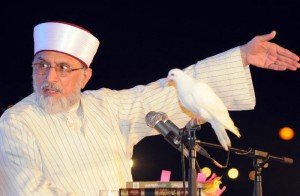 ISLAMABAD: Pakistan’s political crisis deepened today with cleric Tahir-ul-Qadri giving a fresh 48-hour ultimatum to Prime Minister Nawaz Sharif to step down after a former top Election Commission official backed protesters’ allegations of rigging in last year’s polls.
Buoyed by former additional secretary Election Commission of Pakistan (ECP) Afzal Khan’s claim that the general election in which Sharif won by a landslide was rigged, protesters headed by Mr Qadri and Pakistan Tehreek-i-Insaf (PTI) chief Imran Khan stepped their campaign against the government.”I ask the members of National Assembly to leave the house before my deadline expires,” Mr Qadri said addressing his supporters outside the Parliament.
“All the credit for this struggle goes to the people,” he said. Mr Qadri blamed the ruling PML-N for letting the situation escalate to this stage.Mr Qadri said on the twelfth day of the protest, it was now transforming into a “revolution”.
The cleric turned politician alleged that the procedure followed to select the election setup and the way the polls were held, assemblies were formed, was in clear violation of the Constitution.”We consider the government unconstitutional from the very first day,” Qadri said.
Mr Qadri gave the 48-hour deadline to the government, asking it to dissolve the assemblies, let the FIR of Model Town incident in which 14 of his supporters were killed be registered and release Joint Investigation Team (JIT) report.He also demanded that Prime Minister Sharif and his brother Punjab Chief Minister Shahbaz Sharif be arrested.
In an interview to a private TV channel last night, Afzal Khan had alleged, that former chief Justice Iftikhar Muhammad Chaudhry, Justice (retd) Tassaduq Hussain Jillani, Justice
(retd) Riaz Kayani and former Chief Election Commissioner (CEC) Fakhruddin G Ebrahim were involved in the rigging. Khan retired on May 17 last year.Mr Kayani today refuted Afzal Khan’s allegations, terming them as bogus and a conspiracy. He said Khan had leveled false allegations, because he had not being given a service-extension.”Election 2013 unravelling as ppl come forward 2 give evidence of planned rigging. Latest is confession of Retd Add Sec ECP M Afzal Khan,” Imran Khan tweeted.
“BUT Nawaz Sharif resignation necessary so all those in the know & willing to testify are given security & protection,” he tweeted.
No talks took place today between the government and protesters. Three rounds of negotiations have failed to break the deadlock that has now lasted for 12 days.