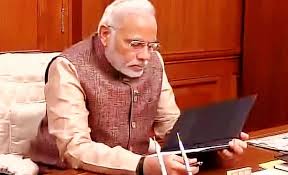 NEW DELHI : The Narendra Modi government has decreed that all government employees must declare their wealth as part of the anti-corruption Lokpal law enacted in December. Barring peons, all government staffers – numbering nearly 23 lakh – have to furnish details of their assets and those of their family members by July every year.
The deadline for this year is September 15. A new form that the employees have to fill has a column for declaring “motor vehicles, aircraft, yachts or ships, gold and silver jewelry and bullion” owned by them or their family members. They also have to put in details of cash, bank deposits, bonds, debentures, shares and units in companies or mutual funds, insurance policies, provident fund and personal loans.
Employees may be exempt from declaring their assets only if it is not more than their four months’ basic pay or Rs. two lakh, whichever is more. Just after taking charge in May, the Modi government asked its ministers to declare their assets, continuing a tradition that the previous UPA regime had put in place. The new ministers were asked to submit all their details within two months, and also cut off business links or interests.
The strict code also requires ministers to avoid accepting gifts, freebies or loans that may embarrass them or prevent them from doing justice to their work. Earlier this month, a set of 19 commandments were included in the four-decade old service rules for bureaucrats, which said they must be politically neutral, take decisions on merit and be fair and impartial. The officials were also told to act only in public interest.