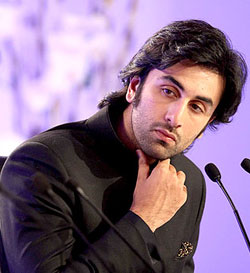 MUMBAI: Superstar Ranbir Kapoor has denied reports of getting hitched to girlfriend Katrina Kaif by the end of the next year.Ranbir, 32, said the couple have made no plans as of now as he is busy with his film projects.
“Yes, I am in love but I have not made any marriage plans yet. There are so many rumours surrounding my marriage like sometime people have quoted me that I am getting married next year. But there are no plans as such,” Ranbir told reporters here during the promotion of “Bombay Velvet”.
The actor said they have not made any plans as he is busy with his movie projects. His denial comes just days after he was quoted by a leading Bengali daily, saying, “We have planned to tie the knot by the end of next year. Both of us have agreed on that. Both of us are sure about our relationship and if we don’t open about it now, it would be showing disrespect to the relationship.”
Katrina too came out with a statement on Tuesday where she dismissed reports of the impending wedding.Ranbir is busy promoting the Anurag Kashyap-directed period drama, set in 1960s Bombay, where he is playing a street fighter Johnny Balraj. “Bombay Velvet” is releasing this Friday.
Asked why he is not joining social media as it has become a major tool for film’s promotion, the “Barfi!” star said, “I feel uncomfortable being on the social medium platform. I don’t think actors have that much of freedom of speech.
If I would have written something on Twitter yesterday, you people would have asked five questions regarding that today. So, I don’t want to have this unnecessary pressure in my head to clarify what I say.”